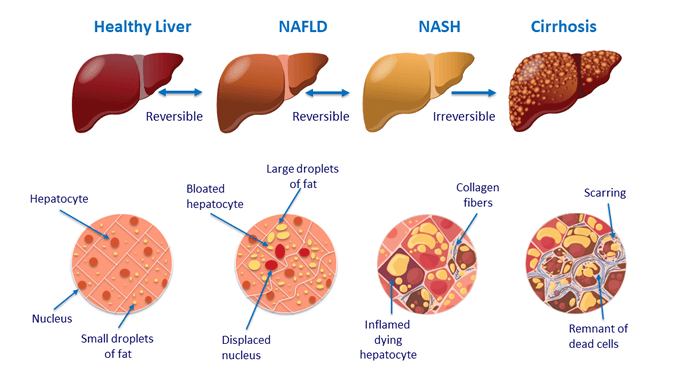 It is increasingly difficult to avoid news about the alarming rise of metabolic diseases.

This is a global trend: the World Health Organization (WHO) reports that worldwide obesity prevalence tripled between 1975 and 2016.

The pattern is the same in children as in adults: T2D in kids has been increasing by 4.8% yearly. Incidence of the autoimmune form of pediatric diabetes is also increasing, but at a much lower rate of only 1.8% per year (Bullock A, Sheff K. N Engl J Med. 2017). In some regions and age groups, T2D already accounts for more than half of all pediatric diabetes (Dabelea D, et al. JAMA 2007).

Along with these conditions, however, is one that often evades our medical radar: non-alcoholic fatty liver disease (NAFLD).

NAFLD is a condition predominantly characterized by fat, in the form of triglycerides, accumulating in the cells of the liver (Vanni E, et al. Dig Liver Dis. 2010). Non-alcoholic steatohepatitis (NASH), is a more severe form of NAFLD that also involves inflammation. It was first described as a condition associated with obesity in 1952, and not identified as a distinct disease until 1980 (Ludwig J, et al. Mayo Clin Proc. 1980).

The numbers are shockingly high in those who are obese or affected by diabetes: 30 to 90% of obese individuals and 60 to 75% of those with T2D are estimated to have NAFLD (Cusi K, et al. Diabetes Obes Metab. 2017).

Data from the Avon Longitudinal Study of Parents and Children (ALSPAC) presented at the 2019 International Liver Congress underscore the increase: one in five young adults at 24 years of age had evidence of steatosis. That’s up from 2.5% in the same birth cohort at age 18.

These numbers alone are enough to give reason for alarm.

But the truth is, NAFLD often goes undiagnosed because it may not be accompanied by liver enzyme elevations. Clinicians who are not specifically looking for it, are not likely to detect it. But that means the actual prevalence could be much higher than previously estimated. 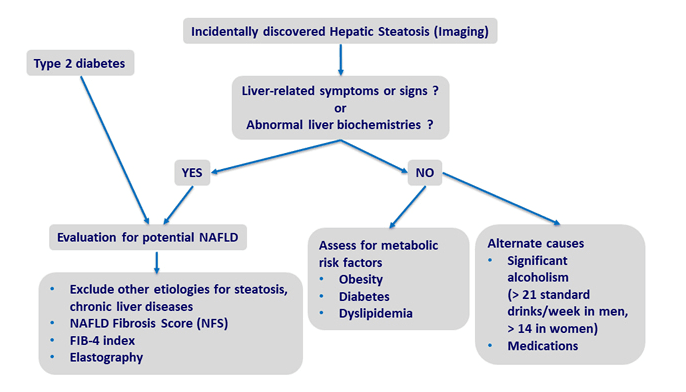 aminotransferase (AST) typically utilize “normal” upper limits that are too high. Many labs consider 40 IU/L to be the threshold of “normal” for ALT, when in fact, the normal upper limit of ALT is somewhere between 29 to 33 IU/L in men and 19 to 25 IU/L in women (Kwo PY, et al. Am J Gastroenterol. 2017).

Another factor is the poor sensitivity of diagnostic ultrasound, the most common tool used to assess fatty liver changes. NAFLD is diagnosable by having liver fat of more than 5% (in absence of excessive alcohol consumption), however, liver ultrasounds are optimally sensitive to detecting liver changes only when fat percentage is greater than 12.5% (Bril F. et al. Liver Int. 2015). Ultrasound has even worse sensitivity for diagnosing NAFLD in obese people—the very patients who are most at risk (de Moura Almeida A, et al. World J Gastroenterol. 2008).

Conventional medicine does not have a lot to offer for treatment of NAFLD. There are hepatitis A and B vaccinations, to prevent further liver-affecting complications. But this does not really address the NAFLD itself.

Recommendations for alcohol abstinence, weight loss, and the proper medical management of blood sugar and cholesterol can help, and may attenuate the elevated liver enzymes (Ahmed A, et al. Clin Gastroenterol Hepatol. 2015). But, long-term compliance is always challenging.

No doubt, the pharmaceutical companies are racing to develop drug therapies for NAFLD. With an affected population so large, who wouldn’t want to have the first FDA-approved drug? So far, no company has hit that jackpot yet.

Fortunately, there are numerous natural interventions that have been studied for the treatment of NAFLD (many in adults, some in children as well) that have reasonable efficacy.

Here are a few worthy of consideration:

Berberine. Berberine, an alkaloid produced by a number of plants including Barberry (Berberis vulgaris) and Goldenseal (Hydrastis canadensis), is a favorite of many when it comes to addressing metabolic derangements. 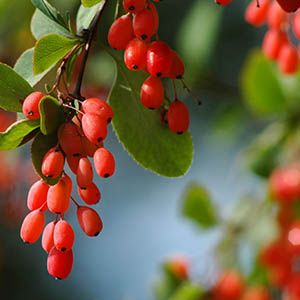 In mice, berberine has been shown to suppress obesity-associated inflammation and hepatic steatosis by decreasing phosphorylation of the inflammatory complex known as JNK1 (Guo T, et al. Sci Rep. 2016), a protein kinase implicated in the development of steatohepatitis (Schattenberg JM, et al. Hepatology. 2006).

In patients with NAFLD, supplementation with 500 mg of berberine thrice daily in combination with lifestyle interventions reduced hepatic fat content and improved lipid and blood sugar metabolism compared to lifestyle interventions alone (Yan HM, et al. PLoS One. 2015).  At a dosage of 500 mg twice or thrice daily, it has been shown in numerous studies to improve cholesterol balance and blood sugar regulation. 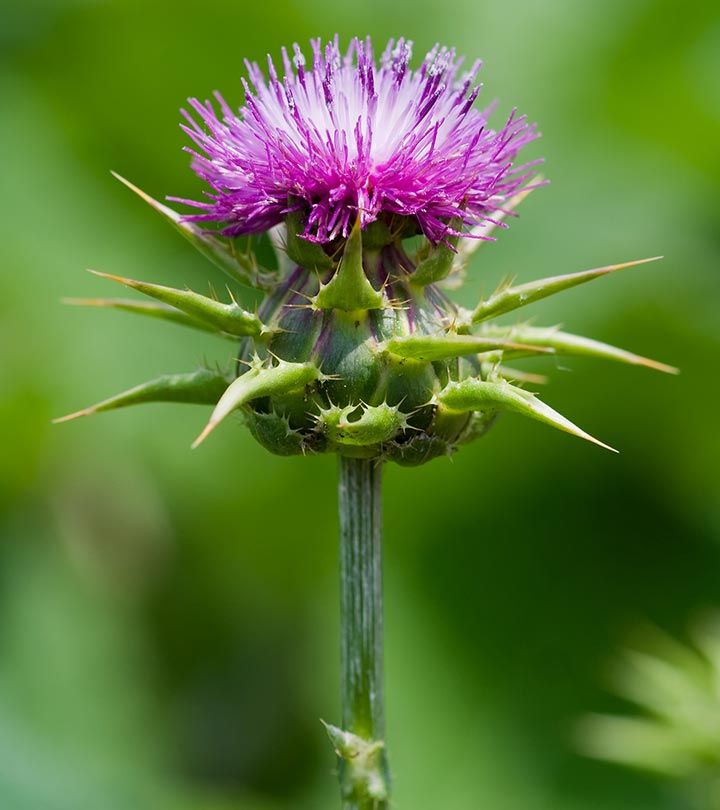 In the studies analyzed, the Milk Thistle dose levels ranged from 140 mg once a day to 200 mg three times a day, for a duration of eight to 24 weeks. Even at a low dose of 140 mg per day, the herb facilitated significant improvements in fasting blood glucose, lipid profiles, and serum insulin levels, as well as AST and ALT reductions from 56 to 37.77 IU/L, and 78.73 to 53.05 IU/L, respectively (Hajiaghamohammadi AA, et al. Hepat Mon. 2012).

Milk thistle also has been investigated for the treatment of NAFLD in children ranging from five to 16 years of age. Children diagnosed with NAFLD were randomized into two groups. Both were taught lifestyle interventions (150 to 250 minutes of light exercise per week, low-fat/low-carbohydrate diet). Children in the intervention group were given silymarin in divided dosages at mealtimes, totaling 5 mg/kg/day.

After 12 weeks, those on silymarin in addition to LSI had a significantly lower grade of fatty liver and significantly improved AST and ALT levels. None of these parameters changed significantly in the control group (Famouri F, et al. J Herbmed Pharmacol. 2017).

A recent study found that only 8% of US adults consume the recommended adequate intake (AI) of choline as provided by foods such as eggs, dairy, other animal proteins, and peanuts. Vegetarians, postmenopausal women, and men are at greatest risk of choline inadequacy (Wallace TC, et al. Nutrients. 2017).

Even the recommended intake levels may not be sufficient for the prevention of fatty liver changes (Fischer LM, et al. Am J Clin Nutr. 2007).  This is particularly true in those with genetic polymorphisms affecting choline synthesis (Song J, et al. FASEB J. 2005). In postmenopausal women with NAFLD, decreased choline intake is strongly associated with an increased risk of fibrosis (Guerrerio AL, et al. Am J Clin Nutr. 2012).

Vitamin E. Oxidative stress and diminished antioxidant capacity contribute to the development of NAFLD (Buzzetti E, et al. Metabolism. 2016). Consequently, antioxidants such as vitamin E have been studied as a potential treatment for this condition.

A recent review article by researchers at the University of Padova in Italy looked at studies of vitamin E as a stand-alone treatment or an adjunctive therapy, at doses ranging from 400 to 1,200 IU/day. The review included clinical studies ranging from 24 weeks to more than two years in duration (El Hadi H, et al. Antioxidants (Basel) 2018).

In a small pilot study of children with NAFLD, supplementation of vitamin E between 400 to 1,200 IU/day for four to 10 months normalized the transaminase and alkaline phosphatase levels. These parameters returned to abnormal levels when treatment ceased (Lavine JE. J Pediatr. 2000).

Numerous clinical findings indicate that tocotrienols—the lesser-known isoforms of naturally occurring vitamin E– may be an even more potent ally in the fight against NAFLD and metabolic disease than their tocopherol siblings. Tocotrienols have been shown to improve cholesterol profiles, reducing total and LDL cholesterol by 15% and 18%, respectively (Qureshi AA, et al. Brit J Med & Med Res. 2015). Tocotrienol supplementation can also reduce triglyceride levels by as much as 28%, while simultaneously lowering markers of inflammation and oxidative stress (Qureshi AA, Clin Exp Cardiol. 2015).

There are now multiple meta-analyses investigating the impact of EFAs on NAFLD, including one that looked solely at the pediatric research. These analyses included supplementation dose ranges from 250 mg of docosahexaenoic acid (DHA) to 50 mL of a mixture of eicosapentaenoic acid (EPA) + DHA.

All these metanalyses and reviews support the use of EFAs for the treatment of NAFLD.

By combining several of these nutraceutical and botanical therapies we may be able to amplify their benefits in patients with NAFLD.

In 2017, a multi-center team of Italian and Austrian researchers published a randomized, double-blind, placebo-controlled study investigating the combination of DHA, vitamin E, and choline for the treatment of pediatric NAFLD. In this study, children with biopsy-proven NASH and persistent aminotransferase elevation were given 250 mg of DHA, 37 IU of vitamin E, and 201 mg of choline or placebo daily for a period of six months in addition to lifestyle interventions.

At 12 months (with the oral intervention for only the first six months, and the lifestyle intervention for the entire period), the children receiving the supplement combo had significantly greater improvements in liver steatosis (as assessed by ultrasound), ALT, and fasting glucose levels than the placebo group. These improvements persisted despite the cessation of the oral intervention six months prior to evaluation (Zohrer E, et al. Appl Physiol Nutr Metab. 2017).

Given the rising incidence of NAFLD in both adults and children, and the lack of effective pharmaceutical treatments, natural strategies stand well-poised as the “next-best thing.” Because many of these therapies address the factors that contribute to the development of NAFLD, they may in fact effectively address some of the root causes, not merely the clinical signs.